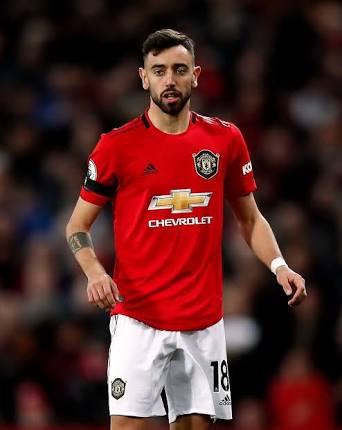 Bruno Fernandes who currently plays for Manchester United has been named in the Premier League team for the year 2020 considering his superb performances for the Red Devils.

Although the Premier League in England was disturbed by the outbreak of COVID-19 which made the League body to suspend football, but action later resumed and Liverpool won the title. It was an incredible record for Jurgen Klopp to help Liverpool to win the Premier League title after 26 years that the club had waited. Since joining Manchester United from Sporting Lisbon, Bruno Fernandes has been superb for the Old Trafford landlords in all competitions.

According to the report on UK Sun, Liverpool striker Mohamed Salah and Tottenham captain Harry Kane are the two top forwards for the year 2020. The list also includes the likes of Burnley’s James Tarkowski and Southampton’s Jannik Vestergaard, who have outperformed others in their position over the course of 2020. In goal is Aston Villa’s Emi Martinez who has been a revelation during his 13 games between the sticks for his club.

The English FA handed the summer signing the heavy suspension following his Instagram post to a friend which he captioned ‘Gracias n******’. He made the post on November 29 after scoring the match winner in Manchester United’s 3-2 win over Southampton. The Uruguayan however stated that although he has accepted the three-game ban, he had no intention to offend anyone with his post.

Manchester United have since released a statement on Cavani’s ban, demanding the FA’s full written reasons for imposing the ban so that it is clear the striker is not racist

Aguero confirms his next club