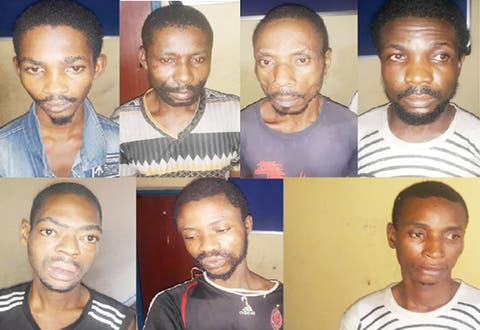 Some suspected kidnappers operating in Rivers State have recounted how they perpetrated crime in several locations of the state and collected ransoms running into millions of naira.The suspects were arrested recently by operatives of the Inspector-General of Police Intelligence Response Team after the kidnapping and killing of a Divisional Crime Officer of the Afam Police Station in Rivers State, SP Moses Egbede.They are Isaac Aforji aka Angel Boy, Philemon Barifa, Emmanuel Okechukwu alias Ezeruwa, Emeka Chukwuma, Prince Zopkara, Onyemechi Francis, a driver; Lucky Teeage, a priest; Pius Kpala, Barriston Gbara, and a youth leader, Lemon Kenneth.It was learnt that Egbede was driving to the office in his Lexus 300 Sport Utility Vehicle on the morning of July 21, 2020 when five armed men ambushed him along Obiama Pipeline Road and took him to their camp in Agbeta in the Eleme Local Government Area of the state.They were said to have contacted his wife, Grace, two days later and demanded N50m ransom which was later reduced to N1m.City Round gathered that On July 31, his son, Emmanuel, took the money to the kidnappers on Ogale Pipeline Road.They promised to release the officer consequently but killed him two days after and dumped his corpse in a well on the orders of Aforji, who claimed that Egbede once detained his wife.In an interview with City Round earlier in the week, 34-year-old Aforji, opened up on his criminal escapades ranging from illegal oil bunkering to series of kidnappings.He said, “I am married with three children. I am from Eleme, Rivers State and attended only primary school. I learned welding for two years and later opened a welding workshop. There was a crisis in my community and my equipment was stolen. I then started to ride motorbikes.

I got married and ventured into oil bunkering business. I had a fire accident and sustained burns. I spent all the money I had for my treatment. I was broke and met a youth leader known as Tombare. I told him about my issue and he got me involved in kidnapping.“In the first kidnapping, we collected N200,000 ransom. The second operation was a woman and her child. We were paid N300,000 as ransom and I got N30,000. We also kidnapped one Okechukwu and collected N1m ransom before we released him. I got N100,000 as my share.“In May 2020, we kidnapped a man known as Lotto man and took him to our camp. I don’t know the amount collected as ransom but I was given N80,000.”He said during the operation, someone identified him and reported him to the police.Aforji stated that policemen reportedly led by the late DCO stormed his house and arrested his wife when they did not meet him.He added, “When I didn’t show up, she was later released. I was told that the DCO Afam Police Station and one Inspector Christ were part of the police team.“Then we kidnapped the policeman (Egbede). His cousin, one Friday, brought the job. He spent some days with us and N1m ransom was paid. I then insisted that he must be killed because he embarrassed me before my wife.“Teddy (a gang member at large) shot him dead and his body was dumped inside a well. Teddy took away his Lexus vehicle.”‌In his account, Barifa, 23, said he used to be a farmer before he went into kidnapping in 2016 after cattle reared by one Alhaji Abdullahi reportedly destroyed his crops.He said they kidnapped Abdullahi and collected N3m ransom out of which he was given N380,000, adding that they subsequently killed and buried the man.“We were seven that kidnapped him. We all contributed N180,000 and gave it to our chief priest (Teeage),” he said.The father of one explained that he relocated from Eleme after Abdullahi’s murder in 2017 and returned last year to form a new gang together with Aforji and four other friends.He also admitted to have participated in the policeman’s kidnap and killing, adding that the gang operated with four locally-made guns.He stated, “I got N200,000 as my share of the N1m ransom. Then, we kidnapped a man in a Toyota Highlander and blinded one of his eyes. The man managed to escape from our camp when we took his car to Port Harcourt for sale. I was arrested two days after that operation.”

Okechukwu, 34, who said his role was to get food for victims held in their camp, disclosed that he got N15,000 from the ransom paid for the policeman.Chukwuma, 22, said, “I am from Abia State but reside in Obigbo. I was part of the group that monitored the policeman in the camp after and was given N30,000 as my share.”Zopkara, who rented out an AK-47 rifle to the gang, said he got a share of between N80,000 and N100,000 after each operation.Teeage said he participated in the kidnapping of Abdullahi, adding that he did not know about his murder. Besides, 28-year-old Gbara, a hunter, confessed to selling bullets to the gang for N4,000.On his role in Abdullahi’s abduction, Kenneth said, “I was given the N3m ransom by the family and every member got N380,000.”