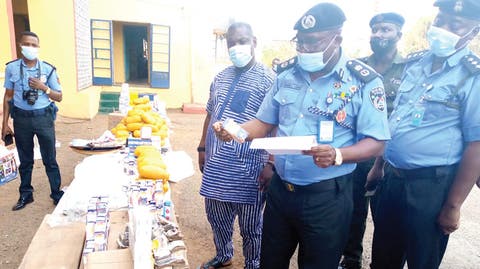 The Ogun State Police Command has recovered N2,722,750 and over N10m worth of hard drugs after raiding a suspected drug cartel in the state.The state Commissioner of Police, Edward Ajogun, stated this while displaying the exhibits at the police headquarters, Eleweran, Abeokuta.Ajogun said the police acted on a tip-off and raided the hideout of the syndicate at the Mayas’ area of Lafenwa, in the Abeokuta North Local Government Area of Ogun State.He said the police made the recoveries, while the suspects escaped from the scene.The police commissioner explained that the command was held back from engaging the fleeing suspects to avoid civilian casualties.He listed the recovered items to include N2,722,750 cash, 110 parcel of weed suspected to be Indian hemp, 50 packs of codeine, 12 packs of Rephnol.Other items of the illegal drugs valued at over N10m are “six packs of uniplex codeine, four packs of Pandeen expectorant, two packs of emzoline, three packs of backwoods honey, one carton of max cough codeine, battle axes, cutlasses and dangerous charms.”‌Ajogun said efforts were being made to track and arrest the dealers.