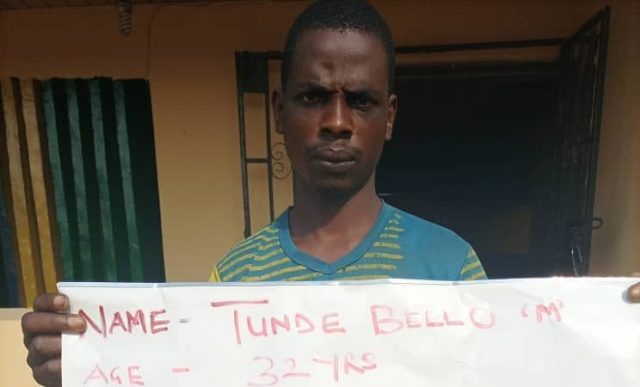 A 32-year-old man, identified as Tunde Bello has been arrested by the police in Ogun state, months after he kidnapped a woman, raped her and collected ransom from her.His victim was a 29-year -old woman, who had the misfortune of riding in his car from Mowe, as she headed to work in Lagos.

Bello changed the course of the journey and drove her instead to a desolate place in the bush.There he subdued her, raped her and then demanded that ransom must be paid before letting her go.

The incident happened in the dawn of 17 September, 2020.On January 16, the long arm of the law caught up with Bello.DSP Abimbola Oyeyemi, the State Police Public Relations Officer (PPRO), gave the details of the case against Bello.“The victim had on 17th of September 2020 reported at Mowe police station that while she was going to her office on that day, she boarded a Hyundai car at about 5:00am from Ogunrun Road, Mowe to Lagos.” But on getting to Mowe junction, the driver of the car made a U-turn to Ibadan road and drove her to a bush along Lagos-Ibadan express road where he beat her mercilessly before forcefully having carnal knowledge of her.

After raping her, he held her hostage and asked her to call her relations to send the sum of N140,000 to him as ransom before he will let her go.“She stated further that she had to call her brother who transferred N140,000 to her account, she also transferred to an account given to her by her abductor before she was released.““Upon her report, the DPO Mowe division, Csp Marvis Jayeola, detailed his detectives to go after the suspect with the view to getting him arrested.“The intelligence and technical based investigation embarked upon by the detectives’ yielded positive results when the suspect who has been under surveillance was apprehended on the 16th of January 2021.“On interrogation, he confessed to the commission of the crime.”The Commissioner of Police, CP Edward Ajogun has ordered the transfer of the suspect to the Anti kidnapping unit of the State Criminal Investigation and intelligence department for further investigation and prosecution.