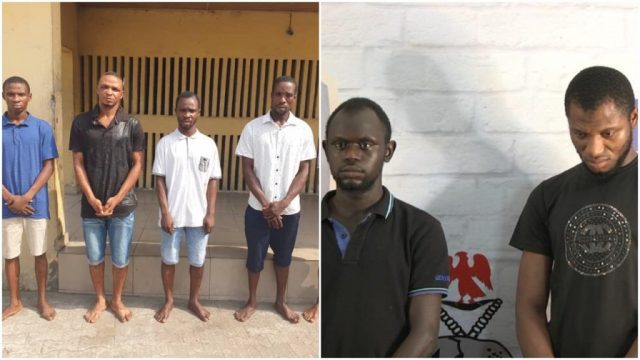 The police on Sunday announced the arrest of five members of a kidnap ring.The gang is specialised in the abduction of women and girls, who they sexually abuse and demand ransom from their families.Force Public Relations Officer (FPRO), Frank Mba, in a statement said the suspects were arrested by operatives of the Intelligence Response Team (IRT) amid rising cases of abduction.Investigations revealed that the suspects usually targeted lone female drivers of Porsche cars, as they drove out of offices, shopping malls and other vulnerable places.“The gang trail them to lonely roads, abduct and take them to their criminal hideouts, sexually abuse them and demand ransom from their families before their release”, the Police said.

Exhibits recovered from the suspects included three mobile phones and a laptop computer.Analyses revealed a series of pornographic videos with underage girls, shared by the suspects on the internet for a fee in US dollars.The Police said a total of 2,792 suspects were arrested in 2020 for sexual and gender-based violence and other sexual-related offences in 2020