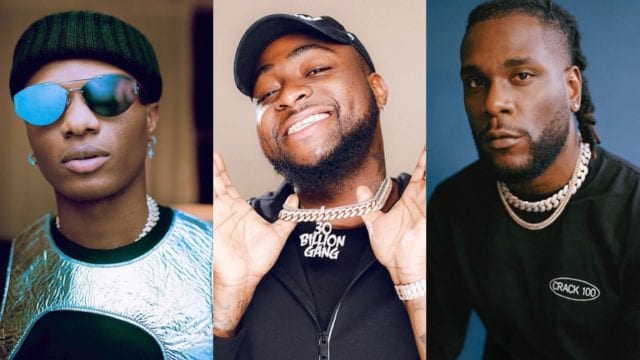 On the 22nd of January 2021, a video clip of Nigerian musicians, Wizkid and Wande Coal in the studio surfaced online. It was a scene which one could see Wizkid recording his vocals for meant for a collaboration with Wande Coal.

On the 17th of January 2021, Nigerian musician, Davido uploaded a pic of Bad Boy Timz in a studio on his instastory, although be didn’t drop much details. On the other hand, Bad Boy Timz also took to his instatory to reveal he had just recorded a monster hit with Davido.

On the 28th of January 2021, a video clip of Wande Coal recording his vocals for a new song while sitting on a couch with Burna Boy surfaced online. The clip was a recording session for a collaborative track between both artistes.

On the 2nd of February 2021, a photo of Wande Coal working on fresh music was uploaded on Juls instastory. Wande Coal was holding onto a mic as he delivered his vocal input for the new sound.

Nigerian musician, Omah Lay was seen in a video clip on the 2nd of February 2021 recorded by Wizkid which was also shared on Starboy’s instastory. Judging from the scenes of the clip, both artistes were working on new music which would be produced by P. Prime.

On the 2nd of February 2021, Dj Coublon took to his instastory to upload a photo of himself and Oxlade working on new music in the studio.

While more details of the record were not revealed, we are hoping we will be able to blast it soon.

“Help me beg my Oga not to sack me,” Israel DMW reveals his job is on the line for the comments he made about...