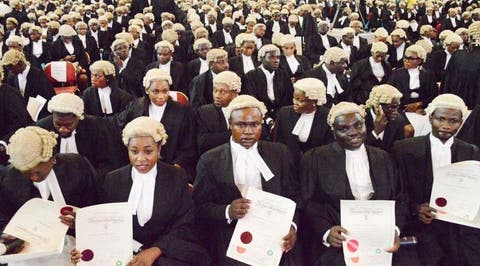 ABUJA— Senior Advocates of Nigeria, SANs, and other lawyers across the country have flayed the threat by President of the United States of America, Joe Biden, to sanction Nigeria and other countries that fail to make laws to accommodate Lesbian, Gay, Bisexual, Transgender and Queer and Intersex, LGBTQI, people.

In their separate reactions to the threat, the senior legal practitioners, maintained that it would be wrong for America to attempt to use its superpower to force sovereign African countries to embrace abhorrent sexual orientations.President Biden had issued a presidential memorandum aimed at expanding the protection of the rights of LGBTQI people worldwide. He threatened to use full range of diplomatic and assistance tools, which may include financial sanctions and visa restrictions, against homophobic countries like Nigeria that retained its anti-gay posture.

Nigeria under former President Goodluck Jonathan had in January 2014, signed the Same-Sex-Marriage (Prohibition) Act, despite spirited effort by erstwhile US President, Barrack Obama, to abort the law.The anti-gay law in Nigeria prescribed a prison term of between 10 and 14 years for anyone caught flouting the law, either by cohabitation between same-sex sexual partners, public show of same-sex relationship, registration, operation or participation in gay clubs, societies and organisation, amongst others.The pressure on Nigeria to repeal its anti-gay laws ebbed with the emergence of the President Donald Trump’s administration. However, it appeared the change of leadership in the US came with revived move to compel countries like Nigeria to reconsider their stoic stance against the LGBTQI community.

President Biden, in his recent memo, called for sanctions against foreign countries that restrict rights of LGBTQI persons.Biden’s memo read in part: “When foreign governments move to restrict the rights of LGBTQI persons or fail to enforce legal protections in place, thereby contributing to a climate of intolerance, agencies engaged abroad shall consider appropriate responses, including using the full range of diplomatic and assistance tools and, as appropriate, financial sanctions, visa restrictions, and other actions.

“All human beings should be treated with respect and dignity and should be able to live without fear no matter who they are or whom they love. The United States belongs at the forefront of this struggle – speaking out and standing strong for our most dearly held values.”The memo directed US agencies working in foreign countries to work harder to combat the criminalization by foreign governments of LGBTQ status or conduct, and directed the State Department to include anti-LGBTQ violence, discrimination and laws in its annual human rights report.

It further called for increased efforts to ensure that LGBTQ asylum seekers have equal access to protection, expanded training for US federal personnel, and potential increased use of priority referrals to expedite resettlement of vulnerable people. It directed US agencies to consider appropriate responses, including the full range of diplomatic tools, and potentially financial sanctions and visa restrictions, when foreign governments restrict the rights of LGBTQ people.Meanwhile, responding to Biden’s threat to sanction countries like Nigeria over their anti-gay stance, a constitutional lawyer, Mr. Dayo Akinlaja, SAN, said: “It is an interesting situation. To us as Africans, it is morally despicable and reprehensible for such to be tolerated, even though in our Constitution, there is a provision that says there should be no discrimination against anyone on the basis of sex. It is such a conundrum and difficult situation really. But as Africans, it is morally reprobate and not something we will want to tolerate on ground of not wanting to be sanctioned by the United States of America. The President of America cannot force us to do what we consider to be inimical. The question of sanctions should not deter us from abhouring what we consider to be immoral or sinful. By reason of our cultural belief, I don’t think anybody should be allowed to force us into something that we consider to be socially and morally unacceptable in our own system.

Nigeria, as a sovereign nation, does not owe America any obligation to repeal a law that was made to reflect our culture and values. We cannot repeal our law to reflect the American way of life. We have our cultures and values, if they do not accord with that of Americans, so be it. Since we cannot compel America to comply with our own way of life, likewise, America cannot dictate to Nigeria the way of life it should condone. It will be a bad start for the new American President to attempt to promote what we as Africans classified as immorality. If it is acceptable way of life in America, then so be it”.

Similarly, another constitutional lawyer and former Secretary General of the Nigerian Bar Association, NBA, Mr. Afam Osigwe, SAN, said: “I hate the idea of America using their superpower to force countries to adopt laws that will offend certain values and customs. It is offensive for America to attempt to force down their own values on other countries through threats. Countries should be allowed to develop at their own pace. Even in America, there are many people and religious organizations that are against homosexuality.

I have not heard of any sanction against such persons. It is therefore bad for America to threaten Nigeria with sanctions over a law that in reality is not even being enforced. Having taken over from Trump, I think that threatening sovereign nations with sanctions over anti-gay law should not be one of the major starting points of Biden’s administration”.On his part, Mohammed Abeny, SAN, urged the federal government to ignore the threat and “damn the consequences”. He said: “To us, homosexuality is immoral. It is unnatural and also ungodly. They have their own way of life which are inimical to our own way of life in Africa. The American President cannot sanction us for such issue. If he does, then it is a bad omen for his administration. It will show that he has no respect for other peoples’ values, customs and traditions. We are a sovereign country and we are entitled to have our own laws and statutes to regulate our conduct. Nigeria should damn the consequences”, Abeny, added.

For human rights lawyer, Chief Nkereuwem Akpan: ”My view has always been that there are certain cultural taboos that no westernization can cross. One of such is homosexuality. I don’t see how the west can ram this one down our throat. The conduct has already been criminalized by federal statutes and no threat of sanction can affect its implementation, neither will the law be repealed in our lifetime or at all.“The anti-gay law was very easy to pass because apart from the fact that the very idea of homosexuality is something that all the major religions forbid, most traditional African societies hold an abhorrence to it”.

Adeniji Kazeem, former Attorney -General of Lagos, SANTo the best of my recollection there is an existing Federal law banning same sex marriage. Most laws are a reflection of our unique culture, prevalent norms and Socio-economic factors.The National Assembly or the Executive have powers to review any law if they believe there has come a time for a shift. However if a debate or a public discourse reveals that there is no basis for change then I don’t believe any external pressure should cause that change. Despite the fact that we are a part of a comity of nations we must always look at what’s in our best interest as a nation.

Jitobo Akanike Over the years only President Olusegun Obasanjo had managed to keep a strong foreign policy. Nigeria is not a poor country in terms of earnings from crude oil sales. A strong and focused Government can call the bluff of American attempt to breach our sovereignty which has been battered by internal insecurity. Visa and all the rest is no big deal. We have weakened our nation by our hands, American government knows this, hence this arm twisting tactic. Hopefully we should be able to hold back President Biden’s threats.

First my view on same sex relationship is that the private conduct of two consenting adults within the privacy of their bedroom should be no one’s business. That’s my view and very few people share it.However, accepting homosexuality as a lifestyle in Nigeria should be a decision Nigerians will make and not imposed on us by threats or ultimatums from the US. Even in the US, it took years to decriminalize homosexuality and stop its classification as a mental disorder. Gay marriage became legal all over the US about five years ago. So why not allow us as a society to debate this issue amongst ourselves and make a decision on it? America has no right to dictate to us. They should respect our sovereignty as a country on this issue.

Emmanuel Umoren Nigeria is an independent country, but we are also in the community of nations. Gay right is like the right to vote by women and oppressed people. Let’s think through it. If the US comes against Nigeria, what can we do? Nigeria could resist the US interest in the 60s and 70s because we had a great economy and the country was better run. Our Heads of Government were treated in UCH and LUTH. Today, our Heads of Government are treated abroad. It has become a thing of pride to tell people I am just returning from the US or UK for treatment. We should fight the fights we can win.

Yemi Omodele The decision of Biden is funny and it is his opinion. Nigeria is a sovereign state. The country needs not copy America in running her affairs in terms of law, economy, and finance and so on. It is immoral for same sex to be legalized in Nigeria. The white people do things as if they are the best in everything. No! America is now trying to use the problems Nigeria is facing to lure it into same sex marriage. It will not happen in this land. With everybody, Nigeria will develop.