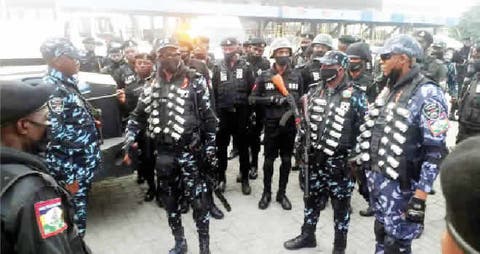 Ahead of today’s planned protest tagged #OccupyLekkiProtest at the Lekki tollgate in Lagos, the Federal Government has deployed policemen and over 150 men of the Nigeria Security and Civil Defence Corps to maintain law and order and possibly stop the protest.This is as some people under the aegis of #DefendLagos have also vowed to organise a counter-march against the #OccupyLekkiProtest demonstrators.

The Federal Government and the police had earlier warned youths who planned to protest at the Lekki tollgate on Saturday (today) to have a rethink and shelve the protests.But the young Nigerians, under the aegis of #EndSARS Season 2, vowed to defy the government’s order.They said their action was informed by the decision of the Lagos State Judicial Panel of Inquiry allowing the Lekki Concession Company to reopen the Lekki tollgate.

The #EndSARS protests had spread across the country in October 2020 to register the youths’ grievances against the alleged atrocities of the disbanded Special Anti-Robbery Squad of the Nigeria Police Force.The protest, which gained massive international attention, came to a halt on October 20, 2020, when heavily armed soldiers allegedly shot protesters at the Lekki tollgate.After about four months of investigating the Lekki shootings, the Lagos State Judicial Panel of Inquiry decided to allow the LCC to resume toll collection at the tollgate – a development that has generated a flurry of reactions among youths.

Speaking on Friday, the NSCDC spokesperson in Lagos, Seun Abolurin, said the corps commandant in the state, Aiyeni Kolawole, had deployed intelligence and surveillance officers at the Lekki tollgate, adding that about 120 armed men of the corps had been placed on red alert.He said, “We have enough men on the ground. We have our men on standby, although the protest has been cancelled. If we get any signal, our men are on the ground to move. About 50 of our intelligence and surveillance officers have already been deployed since Friday morning. About 120 armed personnel are on standby in case there is an emergency.”

On whether the protesters would be arrested if the demonstration holds, he said the command could not predict but would uphold fundamental human rights.He added, “We are civil in nature. We cannot predict until tomorrow (today) comes. Tomorrow (today) will unravel it all but it is advisable for people to do everything within the confines of the law since it has been outlawed for tomorrow.”Also, the Police Public Relations Officer in the state, CSP Muyiwa Adejobi, said that the police and the state government had made their stance against the protest known, insisting that the demonstration would be stopped.

He hinged the stance on the aftermath of the violence that stemmed from the #EndSARS protests, saying that the affected people were still groaning in pains.He said, “The panel of enquiry set up by the government to look into this is on and the governor has approved a certain amount of money for compensation. The basis upon which the so-called organisers want to arrange protests again is not known. They misinterpreted the pronouncement of the panel and they have been enlightened. The panel asked LCC to go and assess the Lekki tollgate plaza. It is not to commence operations

Adejobi acknowledged that people had the fundamental right to protest, but said no right was absolute, claiming that intelligence gathered by the police indicated that the protest would be hijacked.He said, “We have gathered intelligence and done threat analysis on the proposed protest. We got information that the protest will still be hijacked and cause more mayhem than the previous one. The command is not afraid of anything but we should be able to assess and see beyond our noses. We would not fold arms this time round and allow violence to happen. Every sector was affected during the last violent #EndSARS protests.

Also, the Presidential Task Force on COVID-19 has declared that the virus in Nigeria has variants which makes it more deadly. How can they gather and still maintain COVID-19 protocols? It is not possible. We have told those who want to listen that the so-called protest is uncalled for and the command has made it known that nobody will be allowed to hold any protest.“We have warned parents and guardians not to allow anybody to mobilise their children. We are going to resist any violent protest in the state within the ambit of the law. We will be duly professional about our rules of engagement tomorrow (today).”

The PPRO stated that policemen had been mobilised to the tollgate and other parts of the state, noting that “the command will deploy our available resources to make sure there is no breakdown of law and order in Lagos State.”Asked if the police would arrest the protesters if they defied the command’s order to shelve the protest, he responded vaguely saying, “when we get to the bridge, we are going to cross it.”In a viral video on Friday, Armoured Personnel Carrier, trucks, and ambulances belonging to the Rapid Response Squad of the police were seen deployed in the tollgate area.