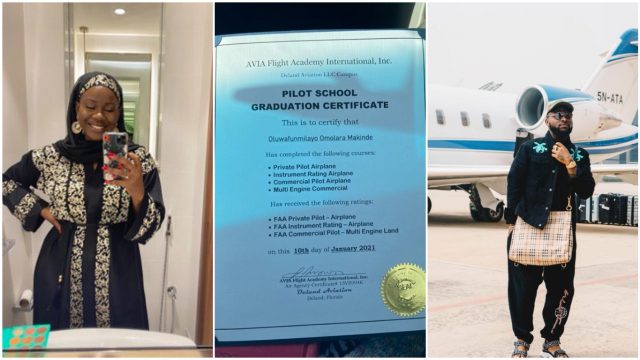 A young Nigerian lady, Oluwafumilayo Omolara Makinde, has taken a long shot at popular Nigerian Musician Davido, asking to be his private pilot.On Monday, February 22, the young lady quoted a photo of the musician beside his jet. Davido, in the caption of the photo, said he is off to have a better time with his clique.In pitching her qualifications to the Holy Ground crooner, 24-year-old Omolara said that she has a commercial pilot licence in flying aeroplanes.

As at the time of writing this report, her tweet has gathered over 10,000 likes with almost 6,000 retweets and hundreds of comments. Fastloaded compiled some of the reactions below:

@DedesVibe asked:”So he should fire the current one flying him to make space for you?”

@Franklyn_TA said:”I thought pilots didn’t have to look for jobs like this cos y’all are scarce or something.”

@khriistmaaxz said:”Seriously, I am so happy for you. To be a pilot isn’t easy. I wanted to be a pilot when I was young but life cheated me somehow. In the process I lost my mother, lost my dreams and everything. But one thing I do appreciate (gift of life). At my age still struggling to achieve.”

@emperor_dowells said:”I’ll still be glad if he calls you and have a little talk with you even if you don’t get the employment, you’d never be unemployed after speaking with David directly…. blessed.”

@Germanprinz said:”I would suggest you do a type rating on boeing 737 if possible max.. Then you stand better chances in getting jobs in America or Africa. Airbus 320 could be a better start after type rating if you wish to work in Europe. Many safe landings and all the best.”