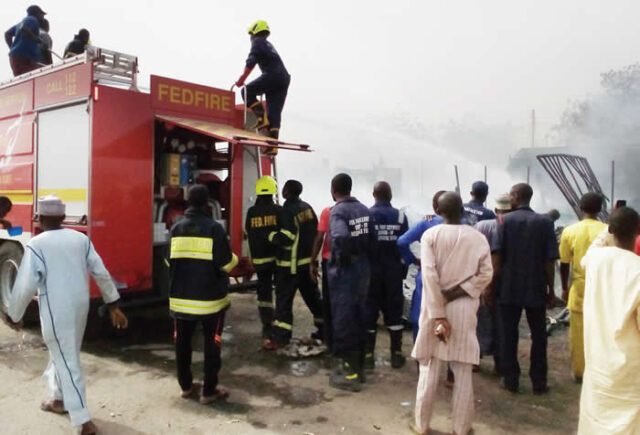 Governor Aminu Masari of Katsina State has expressed shock over the fire incident that led to the destruction of no fewer than 700 shops and stalls in the Katsina Central Market and said the government will investigate the cause of the inferno.Addressing journalists after his visit to the market, the governor described the level of destruction as massive and never experienced before in the state.“It is really too early to ascertain the situation; we have to know the real cause and know how to prevent future occurrence. This will also give us the opportunity to look at some infrastructure in the market, especially something that has to do with adequate provision for fire fighting equipment and water pumps,” he stated.Masari added that the government would seize the opportunity provided by the incident to address some needs of traders at the market with a view to assisting those who lost valuables to the fire.

Similarly, the President, Major General Muhammadu Buhari (retd.), lamented the incident, which led to the destruction of many shops and goods worth billions of naira.In a statement by his Senior Special Assistant on Media and Publicity, Garba Shehu, the President described the inferno as “horrific.”The statement was titled: ‘President Buhari expresses sadness over Katsina market fire’.The President was quoted as saying, “The fire is horrific. I am extremely sad to hear the tragic news about the fire in the Katsina market this morning.

My thoughts are with those who lost their valued wares, and in some of the cases, entire savings. I have instructed the concerned authorities to provide all possible assistance urgently.”A visit to the market on Monday evening showed that trading activities had been suspended, while security operatives made up mainly of the police and personnel of the Nigeria Security and Civil Defence Corps took positions at the various entry and exit points of the market to curb the activities of hoodlums.Men of Federal and the State fire service were also seen around 4.55pm extinguishing the occasional fire springing up from the debris of some of the burnt shops and items.Eyewitnesses said the fire started around 7.30am due to reasons yet to be officially stated as of the time of filing this report.

It was learnt that the Sabo Ungwa area, where the affected part of the market is located, had in recent times been experiencing epileptic power supply.A trader, Fatimah Abdullahi, said her shop was not affected but those belonging to her friends, who travelled to Lagos and Onitsha, were affected.She said, “A friend called us around 8am that the market was on fire. We got here and tried to salvage whatever we could. My shop is not affected but those that belong to my friends are affected.“Unfortunately, some hoodlums disguising as sympathisers exploited the situation to loot some of the shops. We have called those affected so that they can return home on time.”

The fire was also aided by the wild harmattan fire, which initially made the affected shops inaccessible on time.Firefighters from the Federal Fire Service, state fire service and a private company as well as sympathisers assisted in extinguishing the inferno around 11.30am.Another trader, Umoh Udoh, said the fire could have been caused by a power surge, adding that power supply to the area had been epileptic in recent times.Officials of the state fire service declined comments. One of them, who pleaded anonymity, said the appropriate government organ would make a statement on the incident later.

A senior police officer confirmed the arrest of some hoodlums while looting from the affected shops.The police officer, who spoke on condition of anonymity said, “We have arrested several hoodlums, who were trying to steal some of the goods from the market and they are being detained, but I cannot give you a specific number now as we are still arresting them as we see them.””