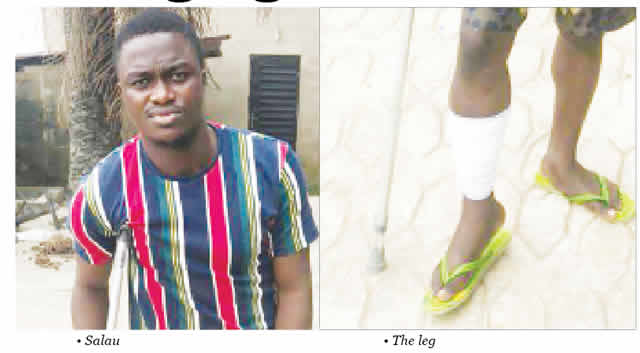 A clearing agent, Adeyemi Salau, has become incapacitated after a yet-to-be-identified officer of the Nigeria Customs Service, Federal Operations Unit, Zone A, Ikeja, allegedly shot his right leg at the Berger checkpoint, Otto Wharf Bus-stop, in the Ajeromi Ifelodun Local Government Area of Lagos State.Salau told our correspondent that he had gone to the PTML terminal in Tincan to clear a vehicle when he was attacked and shot in the leg by the official.He said, “I cleared a Toyota RAV 4 2019 model from the PTML terminal, Tincan on March 17, 2021. The owner of the vehicle and a friend, Monday, were both in the vehicle when I drove to the Berger checkpoint, where the customs officers from the Federal Operations Unit stopped me and ordered me to wind down the window of the car. The customs officers were about 20 at the checkpoint. Immediately I wound down, a two-star customs officer started hitting me with a gun.“The officer brought out a jackknife and attempted to stab me, but I waived it. The same officer ordered me to get down from the car and immediately my right leg stepped on the ground, he shot me.

None of the customs officers explained what I did wrong. Other customs officers started beating the car owner; my friend who saw that I was in pain and made attempts to help me, was also beaten up.“My boss, who was unaware of what happened, called to warn me to be careful because he heard a gunshot close to the office. He was surprised when I told him I was the one that was shot. I was still explaining how the incident happened when the customs officer that shot me collected my phone.”Salau said the customs officers left him when some Special Protection Unit officers intervened.He said, “When my wife called the customs officer who was with my phone, he told my wife to visit Ikeja to claim my corpse. Later on, one of the SPU officers set me free and I crawled to a point where I got a motorcyclist to convey me to a hospital, where the bullet was removed from my leg. I have been using crutches to walk since then.

The Divisional Police Officer who visited me at the hospital said one of the customs comptrollers told him to give me N100,000 as he checked up on me, but I rejected it. My company’s representatives later collected the money and another N100,000 was given to us on Friday. On Monday, my lawyer and I went to the customs Federal Operations Unit in Ikeja, to collect my phone, but they never said anything about the officer who shot me.“An officer, Mr Jack, called other officers and during a meeting said the duty on the vehicle was low and that we did not pay the correct duty. But the duty paid on the vehicle was given to us by the valuation unit of customs, which can be verified. We didn’t write the duty, it was given to us by customs and the vehicle was released to us by customs.”A spokesperson for the FOU, Zone A, Theophilus Duniya, said the victim was shot when he struggled to disarm a customs officer.He said, “What happened was that a Toyota SUV was impounded and the officer that was driving the vehicle to the office was stopped and overpowered, and the vehicle was snatched.

But because there was traffic, the team was able to catch up with the hoodlums who snatched the vehicle and it was in that process that pandemonium ensued.“One of them struggled to disarm one of our officers, so a bullet was discharged and the victim got injured. The team demobilised the hoodlums and drove the vehicle to the office. The vehicle is still in our custody and preliminary investigation has shown that there was short payment of over N3.5m on the said vehicle.”When asked why the agency paid part of the victim’s medical bills, Duniya said it was done on compassionate grounds, adding that the law would still take its course.On the claim that the duty paid was what was charged by customs, Duniya said, “Yes, the vehicle was cleared through a customs process, but what happened in the process is what I cannot tell. The outcome of our investigation will tell what actually happened.”