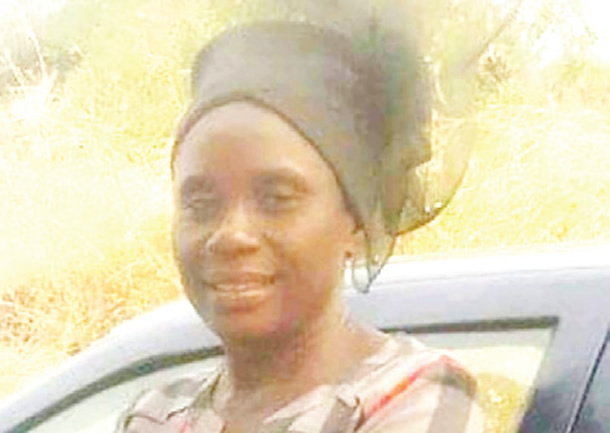 Some assailants, on Sunday, stabbed a 55-year-old woman, identified as Mrs Eunice Omaye Odoba, to death in Otukpo, Benue State.The mother of three, whose husband is a pastor of the Lord’s Chosen Church but is on faith mission to Equatorial Guinea, was said to have been stabbed in the chest.Her younger brother, Adoba Mac, and cousin, Ude Adole, who spoke to our correspondent on the phone, said her corpse was discovered when members did not see her in church and decided to check on her.

Mac said a family meeting was held in the early hours of Sunday before her gruesome murder.He stated, “When we finished the family meeting around 6.30am yesterday (Sunday), she said she was rushing to church and I was the one who took her on my motorcycle and dropped her at the junction to her house and we parted.“Only for me to receive a call from someone, who was working around her house around 3pm that I should rush down to my sister’s house.“On getting there, I saw some of her church members, who I later learnt said that they did not see her in church, which was very unusual, and they decided to check her at home.

I saw her lying down in a pool of her own blood and discovered that she was stabbed in the topmost part of her breast.”

It was gathered that Eunice, who was the proprietress of Verda International School, Otukpo, lived alone, while her children, two boys and a girl, live outside the city.The brother explained that while the only daughter of the deceased was a student of the School of Nursing, Enugu, one of the male children is a serving youth corps member and the other a banker in Abuja.

Mac added that Eunice’s husband left for a faith mission trip to Equatorial Guinea in February this year.It was gathered that men of Nigeria Police, Otukpo Division, evacuated her body and deposited it in the morgue.

When contacted, the state police command spokesperson, DSP Catherine Anene, said she had yet to receive the report of the incident.