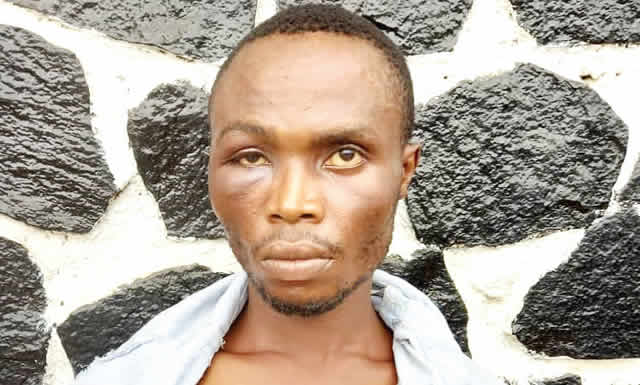 A businessman, Uchenna Njoku, has been allegedly killed by his younger brother, Chukwuma, during an argument over N3000 debt at the deceased’s residence in the Odokekere area of Ikorodu North Local Council Development Area of Lagos State. It was gathered that Chukwuma paid Uchenna a visit on Friday when the deceased asked his brother to pay the N3,000 he owed him, but in the process, an argument ensued between the brothers, which degenerated into a fight.During the fight, it was learnt that the brothers ignored several pleas by Uchenna’s pregnant wife to stop fighting, but in a bid to separate them, she resorted to seeking the help of their neighbours

Speaking with our team a relative of the brothers, Alex Ogbu, said before Uchenna’s wife returned, Chukwuma had brought out a knife and allegedly stabbed his sibling in the stomach, adding that the cause of the fight was N3,000 debt.He said, “It was in my house that Uchenna stayed when he first got to Lagos before he started his life. What we gathered was that around 10pm on Friday, April 2, 2021, Chukwuma visited Uchenna to greet him and during the visit, Uchenna demanded the N3,000 Chukwuma owed him. Uchenna insisted that Chukwuma would not leave his house until he had paid the money. So they started arguing, but Chukwuma told Uchenna that he also owed him N2,000 and that his balance was N1,000.

In the process, they fought from Uchenna’s apartment till they got to the compound, where Chukwuma stabbed Uchenna in the stomach with a knife. Uchenna’s wife, who is pregnant, was with them when they were threatening to kill each other; she left to call a neighbour and returned to see that Chukwuma had stabbed Uchenna in the stomach. He fell to the ground and started bleeding. Blood stains are still at the scene of the fight.

Another relative, Abel Ugochukwu, while lamenting the circumstances surrounding Uchenna’s death, said he died because he was not treated on time, adding that he was rejected by a private hospital.He stated, “People quickly rushed Uchenna to hospital that night but he was rejected by the first hospital. The doctor on duty at the hospital said they couldn’t handle the case there. But the people trying to rescue him lacked experience; they were supposed to use cloth to cover the part where he was stabbed so that air would not enter his body, because he didn’t wear any shirt, and he was on a motorcycle while they were rushing him to hospital.

So, the breeze entered his body and he died while being rushed to the General Hospital in Ikorodu. The wife could not separate the two of them and that was why she ran to a neighbour for help, but before she returned, the matter had gone out of hand. She is still down and due to deliver next month. She fainted twice yesterday while demanding the whereabouts of her husband, because no one told her what had happened to him. It was Uchenna that even taught Chukwuma how to do business.”When contacted, the state Police Public Relations Officer, Muyiwa Adejobi, confirmed that Chukwuma had been arrested, adding, “He will be taken to the State Criminal Investigation and Intelligence Department, Panti, Yaba, for proper investigation.”