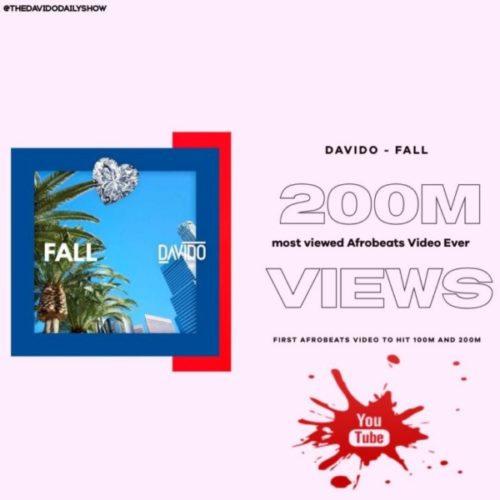 Nigerian Afrobeat sensation and Boss of DMW, Davido has yet reached another milestone achievement on YouTube

The singer crossed a viewing benchmark on the world’s most viewed video platform with the video for his hit single “Fall”.The video hit the 200 million views benchmark, an unprecedented feat in the world of Afrobeat, thus Davido is now the first Afrobeat singer to have his afrobeat video hit 200 million views on YouTube after having crossed the earlier benchmark of 100 million views.The singer while sharing the good news on twitter, revealed that the He and record producer Kiddominant started recording the song as a joke in the studio and didn’t take it too seriously but its now the most streamed afrobeat video in the world.He further thanked all of his fans and gave God the praise for making this possible.