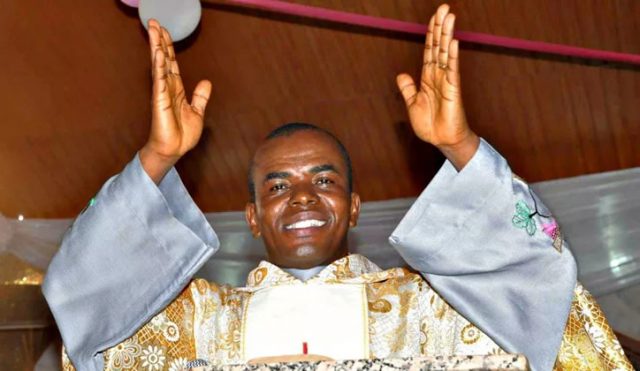 There was jubilation in Enugu State on Wednesday when the Spiritual Director of Adoration Ministry Enugu, Ejike Mbaka, resurfaced after his whereabouts had caused confusion in the state.When Mbaka returned in a vehicle a few minutes past 2 pm, his supporters were seen shouting ‘Father Mbaka, Oh! you are home!.”The reverend father later came out of the vehicle to rejoice with his supporters.Earlier, the supporters struggled to confirm that Mbaka was in the vehicle as they take turns to catch a glimpse of him.“He is the one. I saw Father Mbaka,” one of the supporters jubilated on sighting the cleric.“He is back! Is it a crime to speak the truth? Nothing must happen to him,” another supporter said.The PUNCH had reported that there was a protest in Enugu over the whereabouts of Mbaka.

Mbaka was scheduled to attend his usual Wednesday morning prayer programme, but did not show up, a situation which fuelled speculation that he might have been arrested.The confusion deepened when a group, Ohanaeze Ndigbo Youth Council Worldwide, claimed that the whereabouts of Mbaka is unknown.“We are giving the Federal Government 48 hours to produce the priest, else they should be ready to face Igbo youths. They were dining and wining with him all along and now that he told the truth, they are no longer comfortable with him.“Let nothing happen to Rev. Fr. Ejike Mbaka. It will not be in anybody’s interest,” the group said in a statement by its president, Mazi Okwu Nnabuike.When officials of the Diocese of Enugu, to which Fr. Mbaka belongs, were contacted, some of them said he was not missing while others said they cannot confirm his whereabouts.Reno Omokri, a former media aide to ex-president Goodluck Jonathan, tweeted, “Reverend Father Mbaka has very strong honesty issues that he has to resolve with His Maker.“However, I am against any arrest or attempt to infringe on his freedom by the @MBuhariregime. Reports of his arrest by unknown gunmen, if true, are condemned. #FreeMbakaNow!!!”

When the speculation heightened, the Department of State Services immediately clarified that Mbaka was not in its custody.“He (Mbaka) is not with the DSS, please,” a spokesperson for DSS, Peter Afunnaya, said.