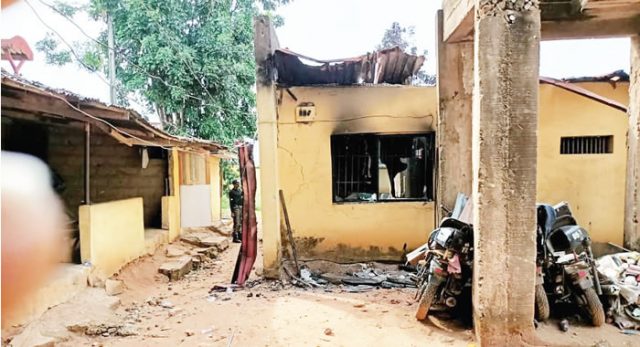 Gunmen on Wednesday attacked a police station in Obosi, in the Idemili North Local Government Area of Anambra State.Two policemen were killed in the mayhem, while several buildings at the station were torched.

This came barely 24 hours after a new Commissioner of Police, Christopher Owolabi, assumed office in the state.A police source said,” A large number of gunmen attacked the station around 11pm to 12am last night, leaving two police inspectors, James and Awalu, dead. All the suspects in the cell were freed before they razed the police station.”Another source told our correspondent that other policemen on duty at the time of the attack fled the station.The state Police Public Relations Officer, Ikenga Tochukwu, confirmed the incident, adding that the command was on top of the situation.

He said the state Commissioner of Police, Chris Owolabi, had dispatched a tactical team to the scene.Ikenga, who noted that the bodies of the two slain policemen had been deposited in a morgue, said investigation had commenced.

No fewer than 10 police formations were attacked in a similar fashion recently in the state and about 16 security operatives killed.In a related development, a police inspector was shot dead after gunmen attacked Obiozara Divisional Police Station in the Uburu Ohaozara Local Government Area of Ebonyi State on Wednesday.The state Police Public Relations Officer, Mrs Loveth Odah, who confirmed the incident, explained that the gunmen also attempted to set the police station ablaze.She noted that it was the second time the station would be attacked as it was among stations burnt during the #EndSARS protest.

Odah said the slain police officer was trying to engage the attackers when he was killed.

She said other policemen on duty, who were supported by soldiers deployed in Obiozara, fought back to ensure that the hoodlums did not burn the station.