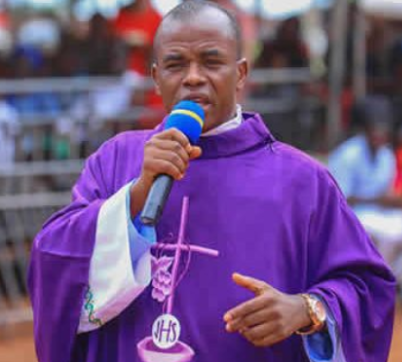 Rev. Fr Ejike Mbaka has publicly apologised to the Catholic Church and the Bishop of the Diocese of Enugu State, Bishop Callistus Onaga, for the unruly behaviour of his supporters in Enugu following rumours of his “disappearance”

Mbaka, who is the Spiritual Director of Adoration Ministry Enugu Nigeria (AMEN), explained what happened on the day his adherents feared he had been abducted.

He explained that he had no idea his members had stormed the Bishop’s residence to cause havoc on May 5. He said that when he heard, in his haste to get to his members and calm them down, he almost had an accident.

On Sunday, May 9, Mbaka went on his knees and apologised to Bishop Onaga, the Catholic church in Enugu and the universal Church for the damage done by his followers at the Bishop’s house at Igbo Eze Street, Independence Layout Enugu, and Holy Ghost Cathedral, Ogui Enugu.

He said the search for him was hijacked by others, including people from other tribes and faith.

Recall that members of the Adoration Ministry had marched around Enugu, last Wednesday, May 5, demanding the whereabouts of their pastor, Mbaka, who was feared to have been abducted.

The protesters stormed the home of the Enugu Bishop where they destroyed property, having accused him of knowing about Mbaka’s whereabouts.