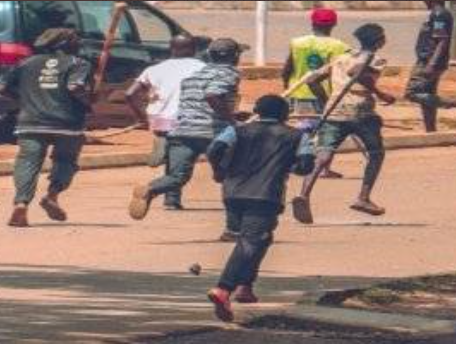 Fresh protests erupted in Orozo, Abuja, yesterday, May 10, leading to the death of two persons.

The latest protest in Orozo came hours after motorcycle operators carried out a violent protest at Karu on Sunday, May 9.

According to Daily Sun, an eyewitness said that trouble started in Orozo after youths of the town, worried about the reckless way tricycle operators parked in the area, approached them and advised that they park properly to avoid creating accidents.

The source said: “The youths advised traders selling bread, fruits, food stuffs and other items by the roadside to relocate further inside to make the road clearer. While most of the keke riders accepted the advice from the youths and moved to the place where they asked them to start using as parking lot, one Hausa boy refused and brought out a knife and attacked one of the youths. Angered by the attack on the young man, the youths pounced on him and gave him the beating of his life.

Before they knew what was happening, the said operator mobilised his fellow Hausas who stormed the area for reprisal attack. The youths of the town who were not deterred immediately mobilised themselves armed with all manner of weapon and chased the Hausa boys away. That was how the riot broke out. Two persons were killed and others injured during the clash.”

Their action sent panic to motorists, pedestrians and traders who hurriedly locked up their shops for fear of vandalisation.

The riot which started at about one o’clock in the afternoon of May 10, saw motorists deserting the routes for fear of having their vehicles attacked by hoodlums who kept chanting “we go kill any Keke wey come Orozo today.”

They mounted a roadblock at the popular Arab junction and operated without being interrupted or dispersed by police who have their outpost a few meters away from the scene of the incident.

Several tricycles were destroyed and others set ablaze by the irate youths who also beat up several persons, Daily Sun reports.

Those who sustained injuries during the riot were said to have been rushed to the Primary Health Center in the area for medical attention.

It took the intervention of the deputy commissioner of police in charge of the FCT who was on a condolence visit to the family of the police officer killed by Shite protesters last week to get the youths to vacate the area.

According to the publication, the FCT commissioner of police, Bala Ciroma, confirmed the report, but said nobody was killed.