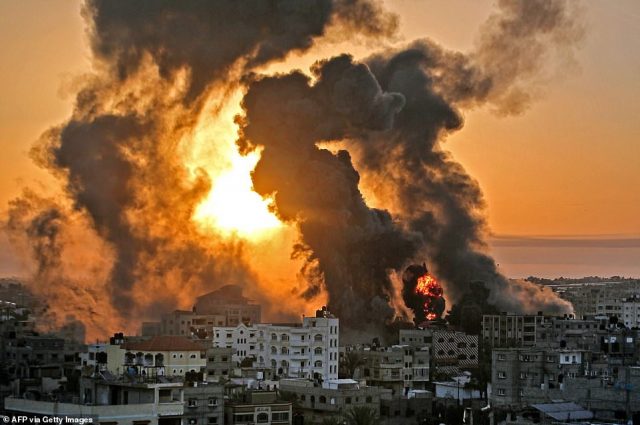 Israel is on the brink of “full scale war,” the UN has warned, after escalating violence in the region claimed at least 35 lives.Israel has deployed 80 fighter jets, tankers and foot soldiers to its Gaza border after Hamas fired around 130 rockets at targets in Israel on Tuesday May 11, following the destruction of a tower block in Gaza in an Israeli air strike.

Israel has also declared a state of Emergency in the city of Lod as three synagogues, numerous shops and dozens of cars were set alight as Israelis and Palestinians clashed following bomb attacks from Hamas.

Throughout Tuesday May 11, continuous bombing by Israeli jets occurred in different parts of Gaza. Gaza’s police headquarters was also destroyed by air strikes from Israel, in what appeared to be some of the most intense fight between Israel and Hamas since their 2014 war.

As at Wednesday morning, the death toll in Gaza rose to 35 Palestinians, including 10 children, according to the Health Ministry, which said more than 200 people were wounded.

The United Nations Middle East peace envoy also took to Twitter on Tuesday night to warn that the conflict between Israel and Hamas is escalating to the risk of an all out war.Tor Wennesland, United Nations Special Coordinator for the Middle East Peace Process, posted: “Stop the fire immediately. We’re escalating towards a full scale war.”Leaders on all sides have to take the responsibility of deescalation. The cost of war in Gaza is devastating & is being paid by ordinary people. UN is working w/ all sides to restore calm. Stop the violence now”

And Monday Hamas fired bombs into Israel, leading Israel to unleash airstrikes on Gaza Tuesday morning, smashing the tower block of a Hamas field commander and two border tunnels. On Israel’s side, five citizens including three women and a child, were killed by rocket fire on Tuesday and early on Wednesday, while dozens of others were injured.In a nationally televised speech late on Tuesday, Israeli prime minister Benjamin Netanyahu warned that Hamas and Islamic Jihad “have paid, and will pay, a heavy price”, adding: “This campaign will take time, with determination, unity and strength.”

As the unrest spreads, hundreds of residents of Arab communities across Israel staged demonstrations denouncing the recent actions of Israeli security forces against Palestinians in one of the largest protests by Palestinian citizens in Israel in recent years.Egyptian officials said they were trying to negotiate a ceasefire while the UK government has said the violence between Israel and Hamas is “very concerning.” Iyad al-Bozum, a spokesman for the Hamas-run Interior Ministry, said the police compound with several buildings was blown up by rockets unleashed by Israel as dawn broke on Wednesday.In the West Bank, meanwhile, a 26-year-old Palestinian was killed during clashes with Israeli troops that entered al-Fawar refugee camp in southern Hebron, Palestine’s health ministry said.The UN Security Council planned to hold its second closed emergency meeting in three days on Wednesday on the escalating violence, an indication of growing international concern.Back in the summer of 2014, Israel and Hamas engaged in a 50 day war that reportedly killed over 2000 Palestinians and rendered hundreds of thousands homeless.