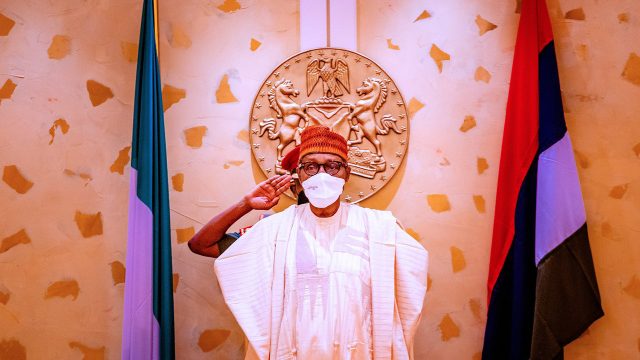 Buhari during the interview with The Nigerian Television Authority

The President, Major General Muhammadu Buhari (retd.), on Friday, asked Nigerians to be fair to his regime.He said if they reflected on the country’s situation before the inception of his regime in May 2015, they would appreciate what he had done.Buhari spoke during an interview with the Nigerian Television Authority monitored by our correspondents.He said, “I want Nigerians to be fair to this administration. They should reflect seriously on the time we came in, especially relative to the North East and the South-South.“They should consider where we are now, the resources, how much oil we are producing; the previous administration before me was producing 2.1 million barrels per day at the price cost of $100 per barrel.“When we came in, militants in the South-South were unleashed on this administration and production went down to half a million barrels per day and then in the market, the oil market collapsed.“I would like Nigerians to reflect on those in terms of resources and I believe that we have not done very badly.”

The President said the people who misbehaved during the #EndSARS protest would not go unpunished.He said this while justifying his tweet which was adjudged to be genocidal.Buhari said, “What I mean is, how can you go to police station, kill the police people who are there, loot the armoury and burn the place?“What do you want to achieve by opening prisons and allowing criminals who have been tried by the legal system and let them escape?“How can government stand aside and allow this confusion to be perpetrated? All they need is confusion and no government can allow confusion.“Look at the #EndSARS incident. The previous governor of Lagos State bought 200 buses to complement the transportation in Lagos and he built a complex involving rails but they went and burnt them.

“The present governor made an album and came to see me, I said ‘thank you very much.’ I took the album, put it in my archive and said, ‘Tell Lagosians to work because we don’t have the money after the government bought 200 buses for some people to come and burn them, so let them work.’When he was asked if he would respond ‘fire for fire,’ the President responded, “More than that. We will arrest them, try them, give them very bad publicity and then jail them so that people will know that if they misbehave, they will not get away with it.”When the presenter told the President that he was being accused of double standards by Nigerians who said he was not going hard on bandits, Buhari again said, “They are being unfair. They should go and ask the governors of Sokoto, Zamfara and Katsina states and find out how we have been deploying the police and the military to deal with the bandits.“We are not sparing anybody but Nigeria is vast and there are a lot of forests.”Buhari said those funding terrorism were only trying to seek relevance.“They are trying to find relevance. They want to use their resources that they have accumulated over time to prove that they are still relevant and we will deal with them,” he said.The fight against corruption

Buhari restated his position that fighting corruption in a democracy is difficult.He recalled how, during his military regime, he arrested those suspected of corruption and got them detained until they were proved innocent.Such, he said, was not possible in a democracy.He said, “I would like to repeat what I used to say. When I was younger in the uniform, when I came, I arrested the president, vice president, ministers, governors and commissioners and put them under detention and told them that they were guilty until they could prove themselves innocent. “Now, this is opposite the democratic system as people would like to believe.”Buhari said he was pleased that the majority of Nigerians think that his administration, under the circumstances, was doing its best.He also expressed his support for specialised courts to try corruption cases

Buhari said he was not satisfied with the current state of the economy and that was why his regime was pushing harder.‘APC’ll do everything possible to remain in power’The President said that the All Progressives Congress will do everything possible to remain in power for a long time.He said, “We are doing all we can to make the APC be in power for as long as possible. “That is why we carried out the revalidation exercise. From state to state, local government to local government and ward by ward.”