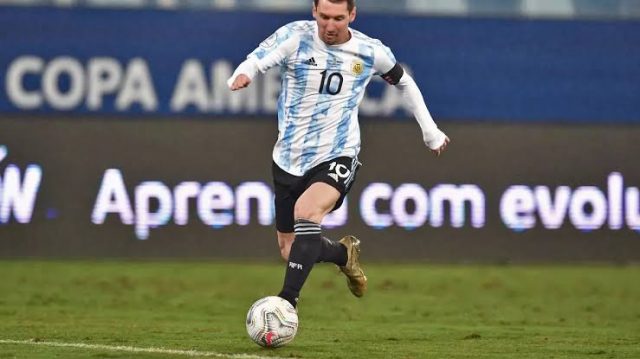 Argentina skipper Lionel Messi became Argentina’s most capped player, earning his 148th match appearance as Argentina trumped Bolivia 4-1 on Tuesday in the Copa América final group-stage game.In the Arena Pantanal, Cuiabá, where the match was played, 34-year-old Messi reached the milestone with style, scoring two goals and assisting one.The PUNCH reported on June 22 that Messi has tied previous record-holder, Javier Mascherano, at 147 matches following the game against Paraguay. Tuesday’s game against Bolivia now puts the Barça man ahead of Mascherano and the likes of Javier Zanetti (147), Roberto Ayala (114), and Diego Maradona (91).Messi’s new record was not the only highlight of the game, as Argentina were in fine form, ending the game with 68% ball possession and managing 14 shots on target.For Argentina’s first goal, Messi received the ball at the edge of the box and played a delightful chipped pass for Alejandro Gomez, who busted the net with a thumping volley in the 6th minute, scoring his second game of the competition.Argentina won a penalty after Gomez was fouled by Bejarano in the 31st minute, and La Albiceleste captain Messi stepped up to make it 2-nil.