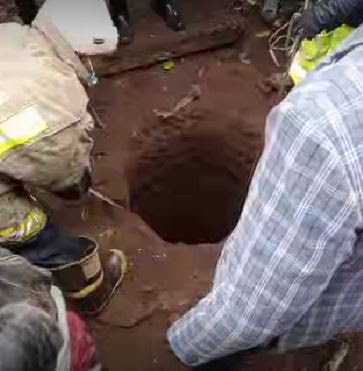 Police in Kerugoya, Kirinyaga county, Kenya have arrested a 23-year-old woman after her five-day-old baby was found dumped in an 80-foot pit latrine.

Kirinyaga county commander, Leah Kithei said the suspect was apprehended when she went to Kerugoya County Referral Hospital, where the infant is being treated after he was rescued by officers from the county fire services department.

“The medics who were attending to her son called the police after she showed up in the hospital. We are now in the process of interrogating her, after which we will present her in court,” Kithei said on Friday, July 9, adding that the baby is in safe hands.

Head of fire services in Kerugoya subcounty John Kiama said the baby was dumped in a pit latrine used by tea and coffee farm casuals in one of the homesteads within Kathiti village in Kirinyaga Central subcounty.

He said farmworkers alerted their manager after they heard the baby crying.

“Our office received a call from the owner of the farm that a baby was crying inside the pit latrine used by his workers. We immediately rushed to the scene, where we began to retrieve the baby.”

He said officers from his department had to destroy the latrine in order to reach the baby.

“We managed to retrieve the infant and quickly rushed him to the newborn unit at the Kerugoya County Referral Hospital where he is responding positively to treatment,” Kiama said.

He is now calling for speedy investigations into the matter.

“People need to respect life because life is precious. Why dump an innocent child with no mistake,” he said.