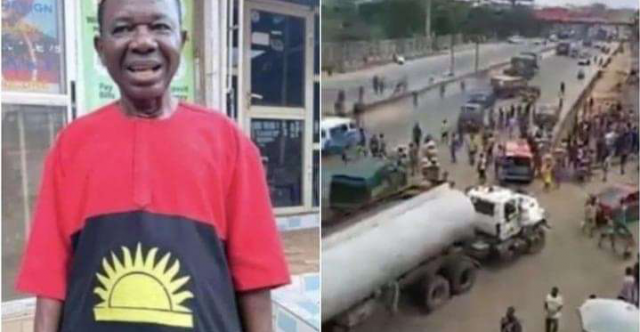 Veteran Nollywood actor, Chinwetalu Agu, has been arrested by soldiers for wearing a Biafran flag outfit at Upper Iweka in Onitsha, Anambra state.This comes a few months after some fans expressed concern for his safety when he first wore the Biafra outfit, which became a sensation on social media.

In the video making the rounds on social media, Chinwetalu Agu was seen being brutalized in his vehicle, which had the inscription “Chinwetalu Films”.The soldiers fired some gunshots to scare off the crowd, which gathered at the scene, and Chinwetalu Agu was seen been dragged on the floor and carried away like a baby.This has generated several reactions online, while some faulted the decision of Chinwetalu Agu in wearing a separatist outfit, others frowned at the action of the soldiers.jaymill091 wrote: Why will he wear the Biafra flag in Nigeria, a Separatist movement’s flag. Imagine somebody where Boko haram’s flag in Nigeria.sbm_oliver26 wrote: @divinetestimony2011 what are you saying. Go and watch the full video the naked him and drag him on the floor then pick him up again and carry him like one babycobbs_nature wrote: This is an infringement on his human rights