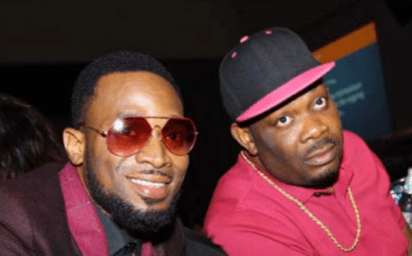 There seem to be a rift between Nigerian legends, D’Banj and Don Jazzy. They two stars who pioneered Nigerian music in the 2000s and early 2010s with Mo Hits Records seems to be having a misunderstanding.By simply sharing a controversial story, D’Banj suggested that he’s holding Don Jazzy responsible for how his career turned out. A fan claimed Don Jazzy played a huge part in how D’Banj’s career turned out suggesting that the Mavin records boss stopped D’Banj from creating more music to set Afrobeats on a world stage.

“D Banj saw the future and was ready to go all out but at that time he needed a Don Jazzy behind him but Don Jazzy was carried away by the homage he gets as one of the best producers in Africa (if not the best).”

“Kanye West gave them an opportunity on a platter of gold and all they needed to do was make Afrobeats on a world stage.“Don Jazzy was satisfied with being a big fish in a river hen he can be a whale in am ocean.D’Banj shared that on his Instagram story suggesting that he agrees with @iamtunice