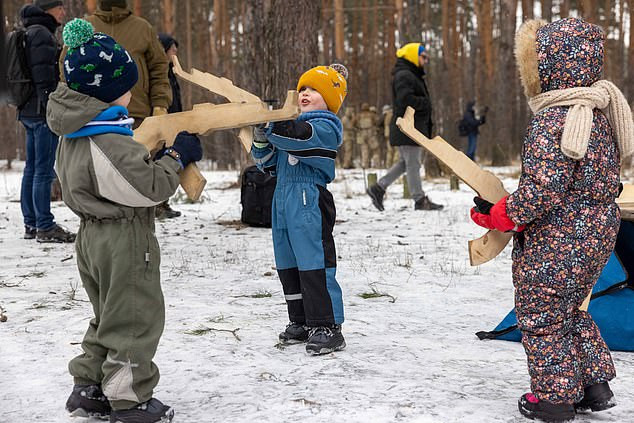 Children as young as four have been pictured receiving military training at an intensive volunteer boot camp as Ukraine’s military intensifies its defensive efforts in anticipation of a Russian military invasion.

The volunteer boot camp in snow-covered woods outside the capital, Kiev saw young and old people taught the rudiments of military skills.

A child named Taras and his brother Bohdan, both aged four, held wooden assault rifles while men and women in the background trained against Russia.

The children’s mother Iryna, 35, said: ‘I don’t think they understand the war and what is happening but they love everything to do with the military.‘If they want to be soldiers when they grow up and fight to defend their homeland I will not stop them.’

‘But for now they want to be a fireman and a policeman.’ Iryna’s uncle fought with the Ukrainian Army and died in an explosion during a battle at Debaltseve, Donbas, an area now controlled by Russian separatists.Iryna added: ‘We did not get his whole body back.’

According to Military rules, the boys cannot sign up as a proper volunteer as he must be at least 18 years-old before he can be considered but another recruit and civil servant Tetiana, from Kyiv, said to the Daily Mail: ‘Yaroslav wanted to be here for training because his dad died five years ago.‘He is the son of a man who gave his life for Ukraine and now it is good for him to have adult male influence and be here today.’