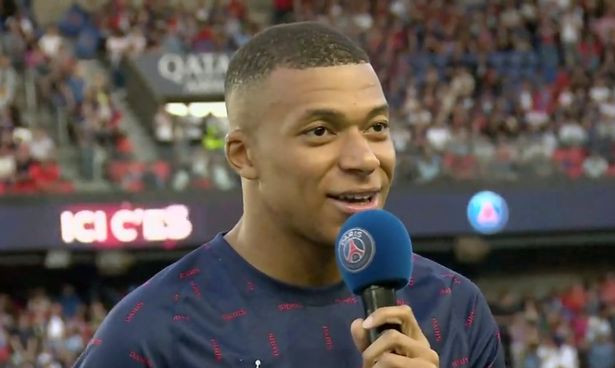 World Cup winner and Paris Saint-Germain superstar, Kylian Mbappe has confirmed he will be signing a new contract at Parc des Princes just days after it seemed he will be joining Real Madrid.

Mbappe addressed the entirety of the Parc des Princes crowd before Paris Saint-Germain’s final home game of the Ligue 1 season against Metz on Saturday night, May 21.

The 23-year-old was handed the microphone to announce he has penned a new three-year deal with the French giants – putting an end to a move to Real Madrid.

Real Madrid were extremely confident that they would boast the superstar within their ranks from this summer onwards once Mbappe’s original deal with PSG had expired.

But a new bumper contract of about £1m weekly has seen the 23-year-old commit his future to the Parisians.

Addressing the crowd, Mbappe explained: “I am very happy to stay at PSG in France. I always said Paris is my home, I hope we continue to play football and win trophies together. Thanks for everything. I hope that I will continue to do what I prefer to with you all… and win titles together! Thanks a lot.”

PSG president Nasser Al Khelaifi broke the news before introducing Mbappe to the crowd by declaring: “I’m proud to give you a beautiful news: Kylian Mbappé has signed until June 2025 with Paris Saint-Germain.”

Mbappe has enjoyed a stunning season individually, helping fire the club to a tenth Ligue 1 title with his phenomenal for in front of goal. The World Cup winner has the most goals and most assists of any player in the league with 25 and 17 to his name respectively in the division alone.

With his new contract, he now surpasses team mates Neymar and Lionel Messi as the highest earner in the club.