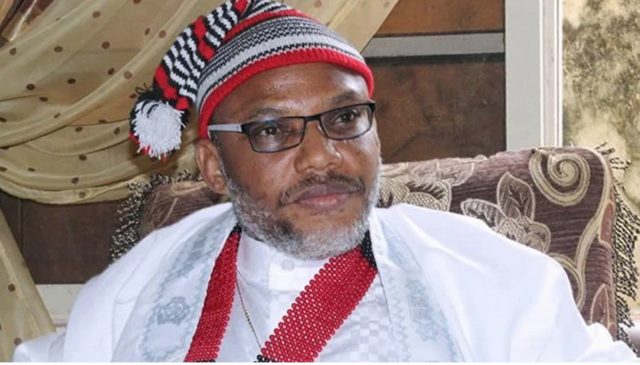 About 72 hours after being set free by the Abuja Division of the Court of Appeal, leader of Indigenous People of Biafra, Nnamdi Kanu, is still being held in the custody of the Department of State Services, The PUNCH learnt on Sunday.But Senior Counsel for Kanu and Lead Counsel for the IPOB, Ifeanyi Ejiofor, said the legal team would be formally approaching the DSS Headquarters on Monday with the enrolled order of court and judgement of the Court of Appeal, which would be available for immediate compliance.While citing legal authorities, he said the freedom of Nnamdi Kanu, which was his fundamental and constitutionally guaranteed right, could not be stayed.Should the government and its security agencies refuse to release Kanu, he said far-reaching extant legal remedies, including reporting Nigeria to international agencies, would be activated to ensure immediate compliance with the court order.

Ejiofor said these in an interview with The PUNCH in Abuja.The PUNCH reported that the Court of Appeal (Abuja Division) had on Thursday freed Kanu of the terrorism and treasonable felony charges preferred against him by the Federal Government.The three-member panel of Justices of the Appellate Court had, in the judgement, set aside the judgement of the Federal High Court, Abuja, which quashed eight out of 15 counts charge preferred against Kanu.

The Appellate Court in the unanimous judgement delivered by Justice Oludotun Adefope-Okojie declared as illegal and unlawful the abduction of Kanu from Kenya to Nigeria and quashed the entire seven charges retained by the trial court against him on the ground that the Federal Government breached all local and international laws in the forceful rendition of Kanu to Nigeria, thereby making the terrorism charges against him incompetent and unlawful.But Ejiofor, who expressed optimism that Kanu would be out of prison today (Monday), advised the President, Major General Muhammadu Buhari (retd.), to do the needful by obeying the court order.He said, “It has been my position that the Federal Government has a right to appeal to the Supreme Court, which is a constitutionally guaranteed right. But the only impediment to the exercise of that right is that the Federal Government must first of all comply with the Order of the Learned Justices of the Court of Appeal which discharged Mazi Nnamdi Kanu, and prohibited further indictment or commencing any fresh criminal charge against him.“It is a settled law, as has been held by the Supreme Court in plethora of cases, including the apex court’s decision in the case of Chukwuemeka Odumegwu Ojukwu Vs Lagos State Government, that an appellant will not be in contempt of an order of a lower court, and approach the Supreme Court in search of equitable remedies to stay execution. It is more so when by the effect of the Judgement of the Court Appeal under reference emphatically set aside the order of the lower court and the frivolous charge which had hitherto legitimised his detention from June 29 2022, they are now terminated and became extinct on October 13 2022.“Furthermore, the freedom of Mazi Nnamdi Kanu which is his fundamental and constitutionally guaranteed right cannot be stayed.“Mazi Nnamdi Kanu is yet to be released, though we will be formally approaching the State Security Service Headquarters on Monday with the enrolled order of court, and judgement of the Court of Appeal which will be available on Monday, for immediate compliance. We expect to have Mazi Nnamdi Kanu released to us today, being October 17 2022.

“It is our position that in the unlikely event that the Federal Government of Nigeria fails to obey the order of the Court of Appeal discharging Mazi Nnamdi Kanu, we will activate far-reaching extant legal remedies to ensure immediate compliance, which remedy may not be limited to resorting to domestic legal remedy, but would be extended to reporting the Federal Government of Nigeria heinous conduct before the relevant international agencies, foreign Institutions and governments. Other legal remedies available to us will not be disclosed here.“President Muhammadu Buhari had said on various occasions that he would not interfere with the judicial process and that it is the court that would set Mazi Nnamdi Kanu free. The Court of Appeal, the penultimate court, has set Mazi Nnamdi Kanu free, it is now time for President Muhammadu Buhari to keep to his word and ensure that Mazi Nnamdi Kanu is released without any further ado.”While setting Kanu free, the Appellate Court agreed with counsel for the IPOB leader, Dr. Mike Ozekhome, SAN, that Kanu was illegally abducted and extra-ordinary renditioned from Kenya to Nigeria, against both, International and local laws.“By the illegal abduction and extraordinary rendition of the appellant, there was a clear violation by the respondent to International treaties, conventions, as well as the African Charter on Human and Peoples Right,” the court held.The Appellate Court said that the Federal Government, having flagrantly breached the fundamental rights of Kanu, lost the legal right to put him on trial, adding also that laws were meant to be obeyed and that the Federal Government had no reason to have taken laws into her own hands in the illegal and unlawful way the matter of Kanu was handled.The failure of Nigeria to follow due process by way of extradition process as prescribed by law, it said, was fatal to the charges against Kanu and further held that the failure of the Federal Government to disclose where and when the alleged offences brought against Kanu were committed was also fatal to the terrorism charges and made them liable to dismissal.“By engaging in utter unlawful and illegal acts and in breach of its own laws in the instant matter, the Federal Government did not come to equity in clean hands and must be called to order. With appalling disregard to local and international laws, the Federal Government has lost the right to put the appellant trial for any offence.

“Treaties and Protocols are meant to be obeyed. No government in the world is permitted to abduct anybody without following due process of extradition. Nigeria is not an exception or excused. Nigeria must obey her own law and that of international, so as to avoid anarchy,” the Court held.The panel also held that the trial court lacked jurisdiction to handle the charges against Kanu, as he was not properly arraigned before the court.The panel, presided over by Justice Jummai Hanatu, also held that the offences Kanu was alleged to have committed happened in Kenya and not in Nigeria.Justice Binta Nyako of the Federal High Court in Abuja had said in her judgement that counts 1, 2, 3, 4, 5, 8, and 15 showed some allegations, which the IPOB leader had to answer.But Kanu, through his team of lawyers led by Mike Ozekhome, SAN, filed an appeal marked CA/ABJ/CR/625/2022, praying the court to quash the remaining seven counts for being devoid of merit.